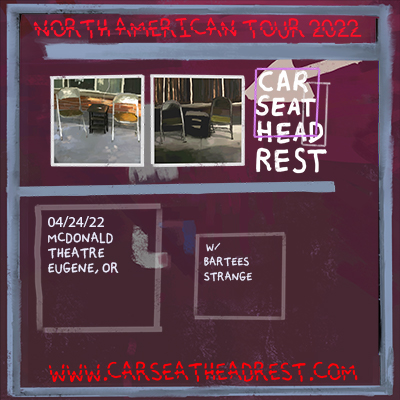 “I’m so sorry to be doing this again…after the Seattle show my health took a downturn. Checked in at the doctor’s and they say it is most likely stomach flu. No clue if it is due to post-Covid vulnerability, but right now I am feeling the burn. We are postponing our Portland and Eugene dates to give myself time to recuperate. We very much hope this will be the last of the changes on this tour and that we can reschedule these dates as soon as possible.”

At the request of the artist, Car Seat Headrest, patrons will be required to show proof of full vaccination before entering the venue OR proof of a negative Covid test taken within 48 hours of the time of entry into the venue. Patrons over the age of 16 will need to show ID matching their vaccination record or proof of negative test. Patrons can provide their actual paper vaccination record, or negative test report, or present a photograph of their documentation. Only tests administered by a test provider, health care provider, laboratory or a pharmacy will be accepted. At home tests will not be accepted, nor will self-reported negative tests. Masks will be required at this show at all times while not actively eating or drinking. Patrons under 12 are not subject to proof of vaccination or a COVID-19 test, but must be fully masked at all times except when actively eating or drinking.

Crafting moody and introspective lo-fi pop tunes that are melodic but structurally ambitious at the same time, Car Seat Headrest is the moniker used by musician and songwriter Will Toledo.

Cutting his teeth creating D.I.Y. recordings on inexpensive home equipment, Toledo’s songwriting — deeply personal, sometimes dramatic, frequently witty, and dotted with unexpected social and cultural references — was what stood out as he gained confidence and strength on self-released early projects such as 2010’s Little Pieces of Paper With “No” Written on Them.

2011’s Twin Fantasy was Car Seat Headrest’s breakthrough work, a song cycle that was a major step forward for the young songwriter.

2015’s Teens of Style was the group’s first album for Matador Records, and though the LP earned positive reviews, it was 2016’s Teens of Denial that seriously wowed critics and established him as an artist to watch in indie rock. 2020’s Making a Door Less Open was an effort to expand the boundaries of Car Seat Headrest’s music, with lo-fi indie sounds giving way to a more expert approach dominated by electronic instrumentation.