An evening with Lotus 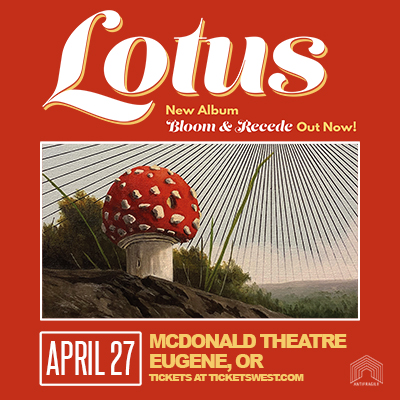 Tickets: Advance tickets are all ages general admission and available Friday, November 18 at 10am within an early bird tiered ticketing configuration ranging from $20 to $25 as earlier price levels sell out online at TicketsWest.

Unless sold out, tickets will also be available at the McDonald Theatre Box Office on the day of the show for $25 beginning at 5:30 p.m. when the Box Office opens.

Lotus has crafted a unique musical style outside of simple genre limitations. On a given weekend the band could be the only group with guitars at an all electronic music festival and then the next night crash a traditional rock festival with their dance heavy beats, synths and samples. Equal parts instrumental post-rock and electronic dance, the band’s distinguishing feature is the ability to maintain a decidedly unique musical voice and remain current while bucking passing trends.

No matter what the venue, the energetic joy and catharsis of a Lotus show is infectious. The band slowly built a devoted fan base through steady touring and the crowds have grown at an increasing pace. This grassroots growth has made the band in high demand for festivals including Bonnaroo, Outside Lands, Ultra, and Rothbury and earned the band sold out shows at the country’s premier theatres and clubs.