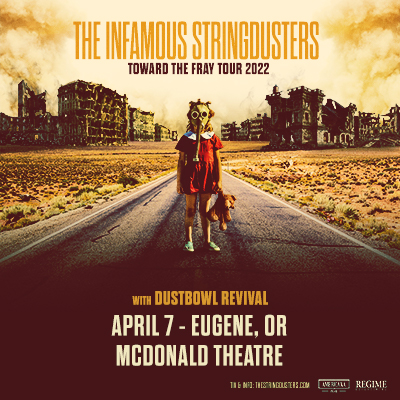 Tickets: All ages advance tickets are general admission and available Thursday, November 11, 2021 at 10am for $25 online at TicketsWest.

Unless sold out, tickets will also be available at the McDonald Theatre Box Office on the day of the show for $30 beginning at 5:30 p.m when the Box Office opens.

All McDonald Theatre patrons, attendees and event staff will be required to show proof of FULL vaccination before entering the venue OR proof of a negative Covid test taken within 48 hours of the time of entry into the venue. Please note that you also must provide a legal ID to match the vaccine card or negative test.

Formed in 2005, the Nashville-based acoustic group the Infamous Stringdusters balance a fluency in old-timey bluegrass and indie jamgrass sensibilities, with an emphasis on strong instrumental work plus a sound that’s both organic and groove friendly. The band earned a stellar reputation among bluegrass fans right out of the box, earning three International Bluegrass Music Association awards after the release of their 2007 debut album, Fork in the Road, and they began exploring a more ambitious musical approach with 2010’s Things That Fly.

The Stringdusters’ genre-spanning approach got a workout on 2016’s Ladies & Gentlemen, in which they collaborated with 11 different female guest musicians, and they earned one of the music business’ highest honors for 2017’s Laws of Gravity.

Dustbowl Revival has always been about pushing the boundaries of what American roots music can be. After celebrating over a decade of sonic adventuring and playing thousands of shows together in ten countries and counting, the group collected a devoted fanbase coast-to-coast. After throwing five of their own virtual Sway-At-Home festivals during the shut-down featuring nearly forty artists, the always evolving group of string and brass players led by founding members Z. Lupetin, Josh Heffernan, Ulf Bjorlin are excited to welcome a new wave of talent to the band, after emerging from a pandemic touring hiatus. After spending years on the road, selling out hometown shows at LA’s famed Troubadour, headlining festivals and wowing crowds from Denmark to China, Dustbowl Revival never stopped making their joyful, booty-shaking soul songs and cut-to-heart folk-rock ballads that lift up their transcendent live shows.