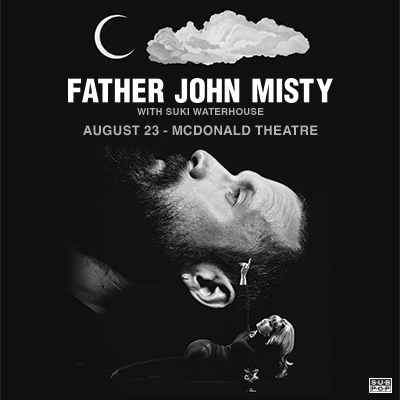 Tickets: All ages advance tickets are general admission and available Friday, April 8 at 10am within an early bird tiered ticketing configuration ranging from $44.99 to $64.99 as earlier price levels sell out online at TicketsWest.

Unless sold out, tickets will also be available at the McDonald Theatre Box Office on the day of the show for from $44.99 to $64.99 beginning at 5:30 p.m. when the Box Office opens.

Father John Misty is a stage name adopted by American singer and songwriter Joshua Michael Tillman. Tillman’s music paints languid, sadly beautiful portraits of love and life on the margins with the moody depth of Nick Drake and the country-influenced textures of Will Oldham. Tillman also adds a touch of dark humor to his Father John Misty persona, especially in his observations of his characters, though it tends to flow with the contemplative, world-weary tone of his songs rather than disturbing it. And he favors rich, expansive arrangements that complement the sweep of his melodies and the expressive reach of his voice. The second FJM album, 2015’s I Love You, Honeybear, was a landmark effort with its carefully crafted sound and arch lyrics, 2017’s Pure Comedy favored a cooler, more elegant approach, and 2022’s Chloë and the Next 20th Century featured cinematic orchestral arrangements on its first single, “Funny Girl.”