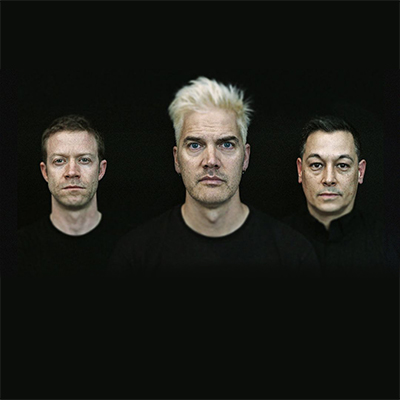 Tickets: Advance tickets are all ages general admission and available Friday, September 9 at 10am for $25 online at TicketsWest.

Floater was formed in the summer of 1993 in Eugene, Oregon and for 24 years consisted of the three founding members, Robert Wynia (vocals, bass and guitar), David Amador (guitar) and Peter Cornett (drums, percussion, vocals, guitar, samples). Peter Cornett announced his departure from Floater on October 17, 2017. Mark Powers joined the band, taking over on the drums, percussion, live samples and backing vocals.

The musical seeds of Floater were planted when Robert Wynia met Andrew Smith at their mutual friend Rich Swanson’s house in early 1992. The two started talking about music and putting a band together, as Robert had already penned many songs by this time he wanted to play and record. They were joined by Andrew Dent on guitar, rounding out the band when Peter Cornett responded to a musicians wanted ad, posted at a local Eugene music store by Robert Wynia. The band Henry’s Child was formed, consisting of Robert Wynia on bass, Peter Cornett on drums, Andrew Smith on lead vocals, and Andrew Dent on guitar. Andrew Dent later left the band and Henry’s Child recorded a 4 song demo tape (titled either Mother Box or Fourskins) with guitarist Ed Cole in the winter of 1992/1993, at Rogers Recording Studio in Glenwood, OR. Henry’s Child never played any live shows during this time, but the band wrote music and rehearsed often at the warehouse Robert, Peter and Andrew worked at. Ed Cole started missing rehearsals and was soon replaced by new guitarist Rich Clinton in March 1993, who alongside the original singer Andrew Smith, remains in Henry’s Child today.