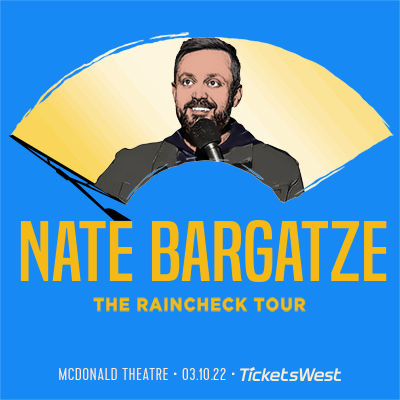 Due to the current global health crisis, the August 22 shows on Nate Bargatze’s Good Problem To Have tour at McDonald Theatre in Eugene, OR have been scheduled for Thursday March 10, 2022. All tickets for the original performance will be honored, so patrons should hold on to their tickets. For ticket and refund inquiries, please contact point of purchase or McDonald Theatre. For tour information, please visit natebargatze.com.

Tickets: All ages advance tickets are reserved seating and available now for $149.75 for VIP seats on the floor in front of the stage (VIP package detailed below), $49.75 for the rest of the floor and lower balcony seats, and $35 for upper balcony seats at all Safeway TicketsWest outlets, and online at TicketsWest.

Nate Bargatze VIP Package for $149.75 includes an exclusive piece of tour merchandise, one of the best seats in the house, plus a meet and greet with Nate (pre or post show to be confirmed via e-mail) available now online at TicketsWest.

Unless sold out, tickets will also be available at the McDonald Theatre Box Office on the day of the show for $149.75 for VIP seats on the floor in front of the stage (VIP package detailed above), $49.75 for the rest of the floor and lower balcony seats, and $35 for upper balcony seats beginning at 5:30 p.m when the Box Office opens.

The reserved seated comedy concert is open to everyone of all ages. All tickets subject to service charges and /or user fees.