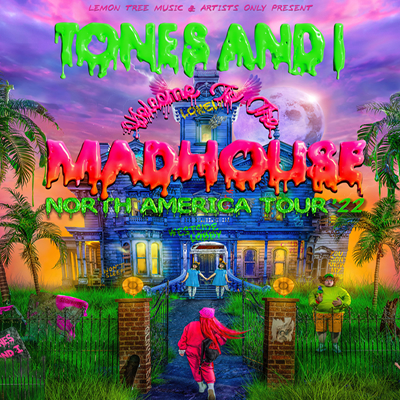 Tickets: All ages advance tickets are general admission and available Friday, July 23 at 10am for $25 online at TicketsWest.

Unless sold out, tickets will also be available at the McDonald Theatre Box Office on the day of the show for $30 beginning at 5:30 p.m when the Box Office opens.

Australian pop singer Tones and I had immediate success when she began issuing singles of her danceable, haunting but still upbeat sound. Buoyed by the massively successful singles “Johnny Run Away” and “Dance Monkey,” her 2019 debut EP, The Kids Are Coming, was certified platinum. Additional singles followed over the next two years, leading to her full-length album, 2021’s Welcome to the Madhouse.

Tones and I was born Toni Watson in Mornington, Peninsula. In 2018, fed up with her retail job, she began busking in Melbourne and sometimes took special trips to the beachside town of Byron Bay to play songs for passing crowds. She signed a deal with Sony-affiliated Bad Batch records in 2019. Her debut single, “Johnny Run Away,” was released in March of that year and became a viral sensation, racking up streams and reaching number one on the ARIA singles chart. Watson’s second single “Dance Monkey” was even bigger, eventually setting an Australian record for the amount of time it spent at number one and topping charts in over 30 countries. Both songs were included on her debut EP, The Kids Are Coming, which arrived in August 2019. Watson’s next Tones and I single, the uplifting “Fly Away,” arrived in 2020, followed a year later by “Won’t Sleep” and “Cloudy Day,” all of which appeared on her full-length debut album, 2021’s Welcome to the Madhouse.