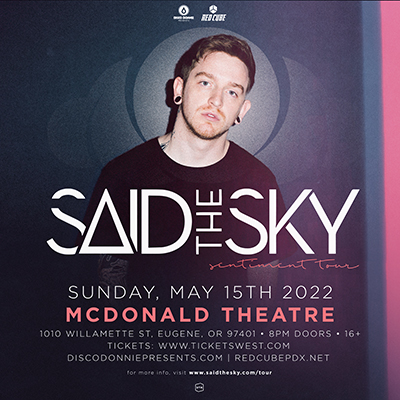 Tickets: 16+ ages advance tickets are general admission and available Friday, December 17 at 10am within an early bird tiered ticketing configuration ranging from $20 to $25 as earlier price levels sell out online at TicketsWest.

The general admission concert is open to everyone 16 years of age and older. All tickets subject to service charges and /or user fees.

DUE TO THE SURGING AND HIGHLY TRANSMISSIBLE DELTA VARIANT OF COVID-19 AND FOR THE HEALTH & SAFETY OF OUR PATRONS, ARTISTS, CREW AND VENUE STAFF, THE MCDONALD THEATRE WILL BE IMPLEMENTING THE FOLLOWING POLICY FOR ALL MCDONALD THEATRE EVENTS, UNTIL FURTHER NOTICE:

Colorado’s Trevor Christensen (aka Said the Sky) is an adept electronic DJ, producer, and musician known for his buoyant, dance-oriented sound. He began crafting his own songs and eventually honed his skills while attending Boston’s Berklee College of Music. In 2014, having adopted the Said the Sky moniker, he signed with Phase Management and released his debut EP, Faith, which featured the singles “Disciple” with Melissa Hays, “Everything,” and “Listen.” More non-album singles also appeared 2015 including “Falling In,” with Illenium and Mimi Page, “Run Away” featuring Car, “Darling” featuring Missio, and others. In 2016, he returned with his sophomore EP, Painted White. That same year he collaborated again with Illenium and Seven Lions on the single “Ares.” He then joined Illenium on tour, and appeared on the DJ’s 2017 single “Where’d You Go.” Also in 2017, he paired with Kwesi for the track “All I Got.”