Onyx and R.A. The Rugged Man 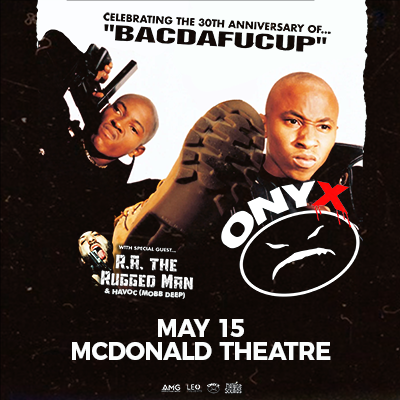 Tickets: All ages advance tickets are general admission and available now for $25 online at TicketsWest.

A combative and in-the-red style of hardcore rap brought Queens MCs Onyx unlikely Top Ten pop success in 1993 with “Slam.” That instant hip-hop classic pushed the parent album Bacdafucup to Top 20 placement on the Billboard 200 and opened a route to the mainstream for similarly rowdy if otherwise distinctive hits by M.O.P. and DMX, two of the many artists with whom central members Fredro Starr and Sticky Fingaz would later collaborate.

R. A. The Rugged Man

One of rap’s more elusive figures, East Coast emcee R.A. the Rugged Man worked with multiple legends as he was coming up, guesting on tracks by Wu-Tang, Mobb Deep, and even Notorious B.I.G. before quietly releasing records of his own. His high-speed delivery, juvenile lyrical mean streak, and self-depreciating humor were all factors that put R.A. ahead of his time.