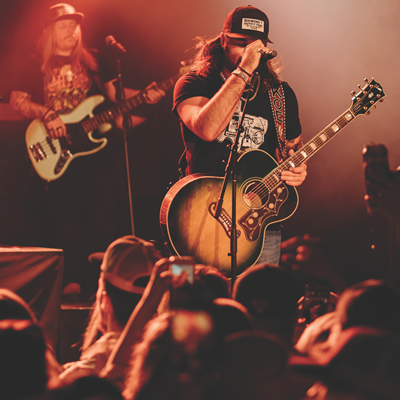 Tickets: All ages advance tickets are general admission and available now for $24 at all Safeway TicketsWest outlets, and online at TicketsWest.

Unless sold out, tickets will also be available at the McDonald Theatre Box Office on the day of the show for $28 beginning at 5:30 p.m when the Box Office opens.

Resting comfortably between the swagger of bro-country and the punch of rootsy rock & roll, Koe Wetzel is a singer and songwriter from Texas who rose quickly from obscurity to become one of the most popular acts on the Lone Star State’s country scene.

Wetzel was born in the East Texas town of Pittsburg on July 14, 1992. He picked up his interest in music from his mother, who was a singer and brought young Koe on the road with her; he sang on-stage with her for the first time when he was just six. Wetzel took up the guitar at the age of 12, but while he had a love for music, it took a back seat to sports while he was growing up.