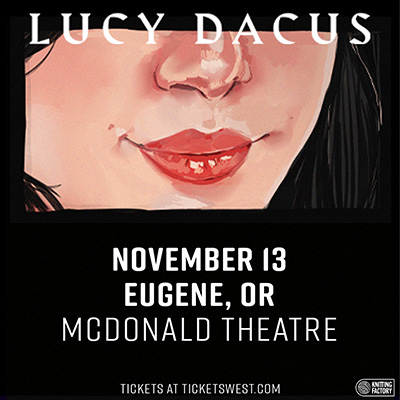 Tickets: Advance tickets are all ages general admission and available Friday, July 22 at noon for $26.50 online at TicketsWest.

Singer/songwriter Lucy Dacus’ rich, buttery voice commands both her thoughtful indie rock tunes and more intimate confessionals. Emerging from Richmond, Virginia’s indie scene in the mid-2010s, she broke through the blogosphere and onto major indie outlets with lead single “I Don’t Wanna Be Funny Anymore” from her 2016 debut album, No Burden. It showcased the songwriter’s playful and also heartrendingly candid way with words. The critical success of the more dramatic follow-up Historian in 2018 was followed the same year by membership in Boygenius, a trio with similarly lauded contemporaries Julien Baker and Phoebe Bridgers. Dacus’ more tender and more autobiographical third solo album, Home Video, arrived in 2021.

On Valentine’s Day 2019, Dacus released a cover of Édith Piaf’s “La Vie en Rose,” the first in a series of holiday-themed original songs and covers that coincided with select occasions throughout the year. They were collected on the EP 2019, issued by Matador that November. During 2020, Dacus started writing and recording her third album, which looked back at her coming-of-age experiences for lyrical inspiration. The resulting Home Video was released in June 2021 and accompanied by opening slots for Bright Eyes and Shakey Graves as well as a headlining tour. The critically acclaimed LP appeared on several charts both at home and abroad. The tongue in cheek “Kissing Lessons,” which was recorded during the sessions for Home Video, appeared on Valentine’s Day the following year.