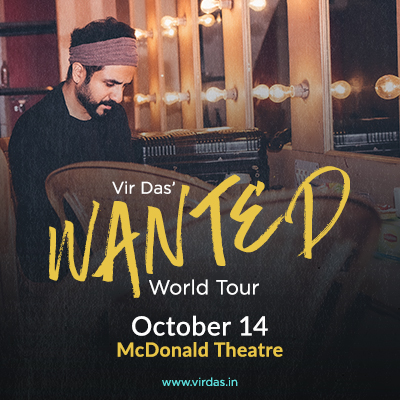 Tickets: All ages advance tickets are reserved seating and available Friday, June 10 at 10am for $39.50 online at TicketsWest.

Unless sold out, tickets will also be available at the McDonald Theatre Box Office on the day of the show for $39.50 beginning at 5:30 p.m. when the Box Office opens.

Vir Das is an Indian actor, comedian, and YouTube personality. Born in India, he spent his early years in Nigeria before moving to the US for his higher education. He began his career as a standup comedian in the comedy show ‘Brown Men Can’t Hump’ which debuted at the Knock Harbach Theatre. After his return to India, he started hosting and appearing in comedy shows such as the popular ‘The Great Indian Comedy Show’. He made his film debut with a small role in the Bollywood drama ‘Namastey London’. He next played the lead role in the film ‘Mumbai Salsa’. Over the years, he has appeared in many Bollywood movies, some of them being ‘Delhi Belly’, ‘Go Goa Gone’, ‘Shaadi ke Side Effects’ and ‘31st October’. More recently, he was seen in the action thriller film ‘Shivaay’, which was directed and produced by Indian superstar Ajay Devgn, who also played the lead role. The film was a commercial success and won the National Film Award for Best Visual Effects. Das has also released a Netflix Special ‘Abroad Understanding’. This made him the first Indian to have a comedy special on the platform.