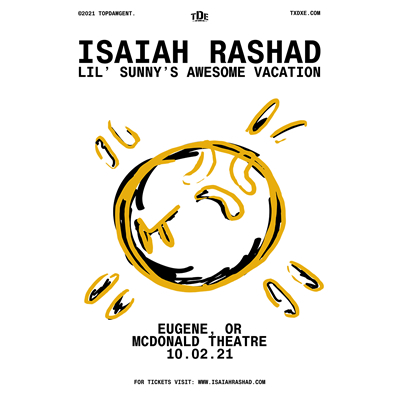 Tickets: Are Sold Out!

Among rap’s most pensive and creative artists since his mid-2010s debut with Cilvia Demo (2014), Top Dawg Entertainment signee Isaiah Rashad has since hit the Top 20 of the Billboard 200 with his first proper album, The Sun’s Tirade (2016). Following the 2020 track “Why Worry,” he released his sophomore album, 2021’s The House Is Burning.

Having contributed to tracks headlined by TDE labelmates such as SZA and Jay Rock, along with the likes of Benny Cassette and Childish Major, Rashad continued to rack up featured appearances while he was between LPs. Still with TDE in 2020, he issued “Why Worry,” his first single in four years. Rashad’s second full-length, The House Is Burning, arrived in July 2021 and included guest spot by Duke Deuce on the lead single “Lay wit Ya.”