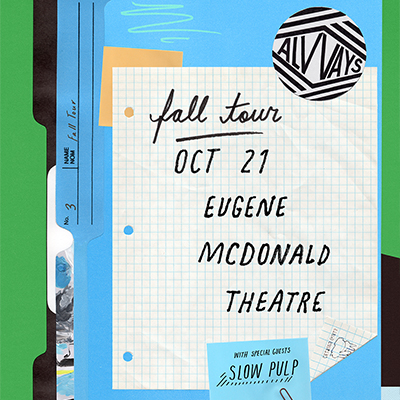 Tickets: Advance tickets are all ages general admission and available Friday, June 17 at 10am for $25 online at TicketsWest.

Toronto-based five-piece Alvvays combine their fuzzy, jangly indie pop with infectious, sugary melodies that recall the likes of Scottish outfit Teenage Fanclub and nod to the U.K. post-punk act the Dolly Mixture. Lead vocalist Molly Rankin — the daughter of John Morris Rankin from the popular Canadian folk family group the Rankin Family — was joined by childhood neighbor Kerri MacLellan on keyboards, and met guitarist Alec O’Hanley at a show as a teenager before they proceeded to write music together.

Rankin self-released a solo EP in 2010 with the help of O’Hanley before bringing the rest of Alvvays together, with Brian Murphy (bass) and Phil MacIsaac (drums) joining the fold. They then toured heavily, supporting the likes of Pains of Being Pure at Heart and Peter Bjorn and John, while busily working on new songs. The band enlisted fellow countryman and musician Chad VanGaalen to record sessions for their debut album at his Calgary studio in 2013, and also worked with Holy Fuck’s Graham Walsh and producer John Agnello (Kurt Vile, the Hold Steady).