TroyBoi - Monster Energy Up & Up Festival 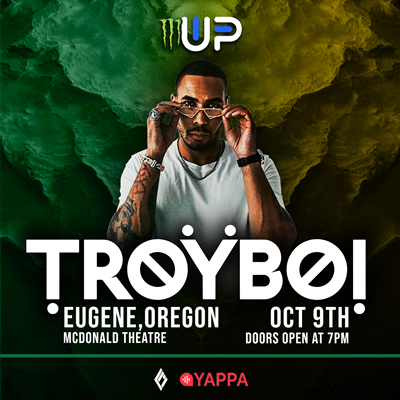 Tickets: All ages advance tickets are general admission and available now within an early bird tiered ticketing configuration ranging from $35 to $37 as earlier price levels sell out online at TicketsWest.

Unless sold out, tickets will also be available at the McDonald Theatre Box Office on the day of the show for $40 beginning at 5:30 p.m when the Box Office opens.

British producer Troy Henry, better known as TroyBoi, is a multicultural electronic music artist who has produced and remixed tracks for rap, R&B, and pop artists in addition to releasing work under his own name. The native of South East London, England arrived during the early 2010s and is most frequently associated with trap music, though his output has also veered from electro-house to commercial dance-pop.

Among his most prominent productions are Little Mix’s “Lightning” and Serayah’s “Get No Better (2.0),” while he has remixed tracks by Danny Brown (“Smokin & Drinkin”), Missy Elliott (“WTF [Where They From]”), and ZAYN (“Like I Would”).

As a proper solo artist, his most successful tracks include the muscular likes of “O.G.,” “Soundclash” (a Flosstradamus collaboration), and the Mad Decent-issued “Afterhours” (featuring Nina Sky and co-production from Diplo). In 2017, Henry issued his debut full-length, Left Is Right, a bass-heavy collection that included collaborations with Healthy Chill, Nefera, Y.A.S, and Ice Cube.